It is becoming apparent that “UGB” is an acronym for an ugly phrase: Urban Growth Boundary.

Did you know that in the last decade there are hardly no new house buildings? During the last 10 years builders have created the least amount of new housing dwellings since the 2nd world war! Why?

Here’s what we read from the newspaper:

As McCall said at the time, “Oregon is demure and lovely, and it ought to play a little hard to get.”

When it comes to protecting greenspace, McCall said, “You don’t knee jerk into the position of all growth, crazy, growth, stinking growth.”

By 1979, Metro’s urban growth boundary stretched from the Columbia River to Wilsonville, and from Hillsboro to Troutdale. Metro can change the line every six years and is always required to maintain a 20-year supply of housing.

By 1979, Metro’s urban growth boundary stretched from the Columbia River to Wilsonville, and from Hillsboro to Troutdale. (KATU Graphic)

While the urban growth boundary has protected farms and forests from becoming housing developments, it has also put pressure on building inside the line.

“You’re just choking the pipeline of housing. And these are self-inflicted errors,” says John Charles, president of the free market Cascade Policy Institute.

He says the urban growth boundary has meant less housing and higher costs.

“So, this has been, you could say, a policy of scarcity by design. And scarcity means the thing that is scarce has to cost more,” he said. “You can’t make housing particularly affordable when the raw dirt is becoming more expensive.”

Charles, with the Cascade Policy Institute, points to the urban growth boundary as one part of the homeless problem. He adds, “There are a lot of other ways the government makes it difficult to provide housing.”

He complains that over-regulation costs time and money and makes it even harder to build housing quickly and affordably. “You are looking at years of permitting. If you have any big trees on the property, well, that’s going to be a problem. Do you have any water on the property, a creek, a little trickle, a little wetland. Whoa, a major problem. It could be a deal breaker,” he said.

But Zapata, with PSU, says what’s really happening is the urban growth boundary is doing what it is designed to do.

“What’s happening today is that we’re seeing the real tension. For the first time Portland has experienced significant population growth and now suddenly we are having to understand what a moderate increase in density might look like,” she said.

That density is now the rule. With House Bill 2001, signed into law by the governor last year, Oregon became the first state in the nation to essentially outlaw exclusive, single-family zoning. It requires cities to incorporate triplexes, duplexes and town homes into traditionally single-family neighborhoods.  – by Brian Wood, KATU News 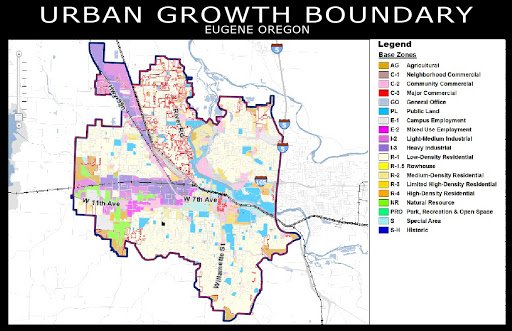 Process –
The process of establishing a Eugene-specific UGB is a rather complicated one with many overlapping steps. We have had to identify:

All of the steps above are based on a combination of community discussions about what is important to community members and analysis of data.

Outcome –
At the end of this process, Eugene’s Urban Growth Boundary will change in three important ways:

What is the latest on the Eugene Urban Growth Boundary?

Housing – The Council direction for housing is to establish the urban growth boundary with no expansion for housing at this time, commit the City to monitor and report on growth assumptions and outcomes, improve the land use code for needed housing development, and begin urban reserves planning for longer term (30 to 50 years) population growth.

Jobs, Parks and Schools– The Council direction for jobs, parks and schools is to expand the urban growth boundary in the Clear Lake area for a combination of jobs (648 acres), schools (54 acres), and parks (222 acres); and in the Santa Clara area for parks (35 acres).

How does the UGB relate to adopting our UGB?

The Urban Growth Boundary Adoption Package is the collection of legally required documents to formally set (adopt) the UGB.

These documents serve two primary functions. First of all, they show why we are setting the UGB in the proposed location. This includes information about how much we expect to grow in terms of people, homes, jobs, and public land like parks and schools. It also includes information about the precise location of the UGB, including the proposed expansion, and why that new land was selected.

Secondly, the Adoption Package includes information about how we will meet our 20-year land need with the UGB. This includes policies and land use code that go beyond how much land is in the UGB to look at how that land can be used or developed.

Because these documents are focused on showing the state that we are meeting our responsibilities in accordance with state law, most of the language in these documents is both legal and extremely detailed.

All documents in the UGB Adoption Package are related to the urban growth boundary.