Mortgage Rates Affect you as the buyer and borrower of any house.  Right now mortgage rates are low for  the well qualified borrower. The rates continue to be low. Let’s take a look at mortgage rates of the past.

Over the past 48 years, interest rates on the 30-year fixed-rate mortgage have ranged from as high as 18.63% in 1981 to as low as 3.31% in 2012. Mortgage rates today remain at historical lows, with over 60% of mortgage holders paying rates between 3.00% and 4.90% as of 2015. We used interest rate data from Freddie Mac’s Primary Mortgage Market Survey (PMMS) to examine historical mortgage rates and the factors that have impacted their downward trend.

Home-buyers who have recently borrowed fixed-rate mortgages have benefited from interest rates at historical lows. After reaching a high of nearly 19% in 1981, mortgage rates have steadily declined and remained in the low single digits. Since the housing crisis in 2008, rates have consistently stayed under 6%, with the rate on 30-year fixed-rate mortgages bottoming out at 3.31% in November 2012.

In 1971, when Freddie Mac began surveying lenders for mortgage data, interest rates for 30-year fixed-rate mortgages ranged from 7.29% to 7.73%. Throughout the 1970s and 80s, mortgage rates steadily climbed as unchecked inflation contributed to a volatile national economy. Mortgage rates set by independent lenders are also influenced by the interest rate which the Federal Reserve charges banks for borrowing money.

In the early 1980s, high-rate loans emerged as a part of the Federal Reserve’s plan to fight inflation. By October 1981, the average rate for 30-year mortgages reached its all-time high of 18.63%. Today’s rates, while currently on the rise, are still at all-time lows compared to previous decades. 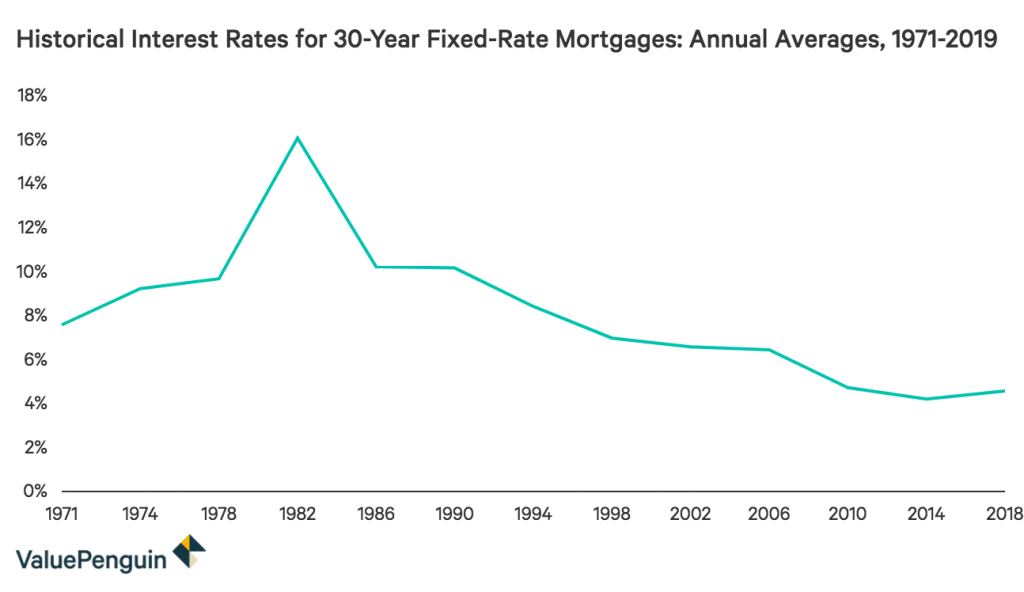 Today, current mortgage rates remain at historic lows around 3.97% — with over 63% of homeowners with mortgages paying interest rates between 3.00% and 7.84%, according to the Census Bureau. While rates spiked in the Fall of 2018, we’ve seen a slight dip in rates over the past few months. As of January 2019, interest rates for new 30-year mortgages were as low as 4.51%. Such low rates are favorable for the consumer because they keep the interest portion of monthly mortgage payments relatively cheap.

Information for this article was derived from BankRate.com