Foreclosure starts rose 12 percent from February to a total of 52,100 in March as later-stage hurricane-related delinquencies began to roll over into active foreclosure starts. This, according to the First Look report on Mortgage performance released by Black Knight on Thursday. The report noted that over two-thirds of these foreclosure starts were in hurricane-impacted areas of … Continued 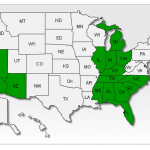 US Treasury lists the amount paid to states, we've listed it here in order of least to highest paid states. In other words, the hardest hit states.